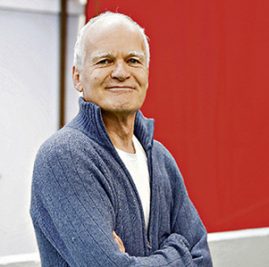 Interview with Jean-Marc Aeschimann, Specialist Professor in charge of CDR

How did the idea of the Dalcroze Certificate come about as Dalcroze pedagogy training programme around the world?
In the 70s and 80s there was a Dalcroze Bachelors degree which lasted 4 years. But there were people who wanted to learn more about Dalcroze pedagogy, but could not commit themselves to 4 years of full-time study. So the idea of the certificate came about under these conditions. There were people in other countries who wanted to be trained in Dalcroze pedagogy, but who did not have the possibility to come to Geneva for a bachelor’s degree, and so Dalcroze certificates appeared in Belgium, England, the United States, etc. In the 88s, for example, I went to Pittsburg to teach in a certificate programme, for example.
It wasn’t certificates during the year, but during the summer school, it lasted 3 weeks for 2 years. Formulas adapted to each country…
The Certificate was recognised for example in the United States by the Dalcroze Association United States, but there was not yet this world-wide recognition.
So, it was based on the need for people to deepen Dalcroze, but who couldn’t commit themselves to studies lasting several years. However, it immediately became clear that the certificate did not give the right to teach Dalcroze courses. Sometimes an experience produces a click that takes you to many new horizons. But we have to be very careful about the rules that give access to the titles, so that people don’t say they are doing Dalcroze and end up doing anything under the name Dalcroze.

What is the Dalcroze Certificate?
It is a continuing education programme in Jaques-Dalcroze pedagogy.
In the Dalcroze Certificate programme there are the same subjects that we teach in the other diplomas (bachelor’s, master’s, higher diploma). It is the same pedagogy, only the number of hours makes the difference. CAS Dalcroze is an introduction and allows you to discover and understand the pillars of Dalcroze pedagogy. There are people who understand Dalcroze very quickly, it is like a trigger that opens up new perspectives. They can understand the Dalcroze principles, use body movement in the learning process and make music a living language.
This formation allows you to immerse yourself in the principles of this pedagogy. It is an initiation, a discovery of Dalcroze pedagogy, but it can also be a deepening for those who already know the pedagogy. Working in groups and at different levels of knowledge, allows great flexibility in the choice of the level of teaching.

What are the main objectives of the Dalcroze Certificate Romania?
The main objective is to respond to a demand and in Geneva you can see that there is always a lot of people who sign up and there is the same thing in Paris and it is also developing in Barcelona, in Spain and every time there are people who want to immerse themselves and discover and do a different kind of musical teaching.
Dalcroze Certificate Romania responds to people’s needs by offering them the possibility to get to know and use Dalcroze tools through direct experimentation, by living them. So, the aim is really this: to meet the needs of people who cannot give too much time, but who want to know Dalcroze pedagogy and apply it in their own profession. In each country the certificate has a slightly different colour, but all Dalcroze trainers, who are responsible for the Dalcroze Certificate, work to ensure that the titles are the same all over the world. But each time it is necessary to adapt to the particularities and customs of a country, etc.

Does Dalcroze Certificate train Dalcroze teachers?
Dalcroze does not train Dalcroze teachers, this continuing education programme allows you to enrich and use the Dalcroze principles in your personal and professional life: it can be music and dance teachers, but it can also be teachers who do this training to use the principles of this active pedagogy in teaching in primary schools, for example. There is a Dalcroze toolkit that can be used in professional life.
With the Dalcroze master’s degree we can say that we teach Dalcroze for amateurs, but with the certificate we can say that I teach according to Dalcroze principles, but I cannot say that we open a Dalcroze course.
We can be appointed as Dalcroze teachers when we have the Dalcroze master’s degree (5-year course – bachelor 3 years and master 2 years), which gives the right to teach the Dalcroze method to amateurs (children, adults), because the master’s level does not give the right to train professionals in this method. For this, you must obtain the higher diploma and you must first have the Dalcroze master’s degree. The Dalcroze Higher Diploma has a personalised programme and structure and can last several years. With a higher diploma you can teach Dalcroze all over the world, at all levels, you become a Dalcroze trainer like me, for example.
As a Dalcroze trainer … It opens doors to working with professionals. Having the higher diploma you can be responsible for everything, I can be responsible for opening this course in Bucharest, the Institut Jaques-Dalcroze Geneva will recognise my work and the diploma I will award.

What are the requirements for the recognition of Dalcroze Certificate Romania by the Jaques-Dalcroze Institute (IJD) in Geneva?
To have an IJD-recognised trainer with the higher diploma and to teach a curriculum established by the IJD – programme, number of hours, structure. Some aspects will be adapted, but they guarantee the same level.

Is CAS Dalcroze in Geneva different from Dalcroze Certificate in Romania?
There are small differences. It is clear that in Switzerland, students have to attend a week’s course in Dalcroze. We can’t have that in Romania, so we will find arrangements and solutions for this internship. Basically, it is the same timetable, the same structure, the same number of hours as in Switzerland. In Switzerland, the CAS has to meet the standards set by the Bologna agreement for universities, vocational schools, etc.

Who can register for Dalcroze Certificate in Romania?
Any artist, any professional musician (music teacher or musician), any pedagogue (teacher), any therapist/psychomotricion …, but all with a bachelor’s degree or similar, i.e. it is open to any professional exercising a profession. But it is useful to have a musical background. There are people who follow the training without aiming for a diploma at the end, but for them it’s useful for their personal training, they don’t care about paper, so anyone who wants to follow and who manages to follow because you have to arrive with a certain background in music and movement, could apply.
For example, take the case of a musician. He is not necessarily going to progress in musical practice, but he will acquire new pedagogical means. Some may discover musical improvisation, others the importance of body movement, new relationships with music etc. A dancer will not progress in body movement, but rather in the understanding of music and the musical universe. If the background is really weak, a parallel technical training should be imagined.

How do you determine the musical and corporal expression background that the participant should have?
A list of prerequisites for the level of music theory, for example. There should be a certain level of vocal or instrumental practice, this would be ideal. For a dancer, if we consider that his instrument is the body, he doesn’t necessarily need to play the clarinet, but as long as he is comfortable with his body and likes to sing. It is really a personal enrichment. In my professional life, I’ve seen people of very high instrumental level who weren’t terrible and others who said they were beginners, but who were extraordinary and then, for example, in improvisation, they would go off at the drop of a hat, because they understood things much faster.
If we don’t have that… In Geneva I had a guy who completely changed profession, who registered, who didn’t pass the final exams, but who got a lot out of it for him and it was useful for his professional reconversion. It depends on each person too. If he is satisfied and finds himself in the programme that we have to hold..
The registration is based on a file and if we encounter a problem we ask for a meeting with that person. If someone listens to music every day, they have a certain ear, it makes a difference. I sing him a melody and see if he is able to sing it. There are ways to see a person’s availability and ability to work through an interview.

What contains the registration file ?
A CV, a letter of motivation, a form attesting to the musical and corporal expression experience. It’s important to see the CV, but also what he’s currently doing.
The interview with the candidate can be done by phone or by internet as well…

What would be the greatest benefit of participating in Dalcroze Certificate in Romania?
New horizons, new exciting possibilities… Every time in this training, people are very happy, Dalcroze is a very good tool… I, for example, couldn’t improvise on the piano, I lacked the trigger and Dalcroze brought it to me and I believe that Dalcroze also brought me a pedagogical vision and a questioning of the functioning of the brain. It allows you to take time and a little distance for what you experience professionally.

What are your expectations as the person in charge of this continuing education programme in Romania?
That this pedagogy can be better known and more present in Romania and that more people discover this efficient and wonderful toolbox. What I always find interesting is that when I teach, we are in the real world, we are in the heart, in the present moment and beautiful things happen and that’s what I like. And there are moments of music, and when I say music it’s as much physical as it is sonorous, and there are beautiful exchanges and to see that shiver in people’s eyes because they are interested and they are experiencing something that is interesting for them, for me it’s a gift from heaven.